The world waking up to EOC mattress sustainability 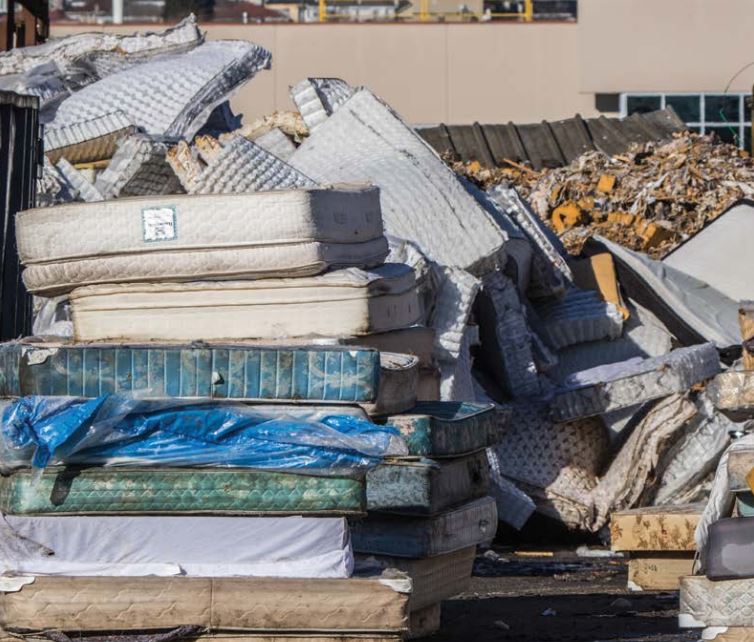 In late July, almost the entire continent of Europe endured a particularly fierce heat wave, with some countries like the UK recording highest ever temperatures till date. Pictures surfaced of train signals melting and fires breaking out, with the London mayor noting it to be the busiest day for the fire department since WW2.

The reasons for these unusual developments aren’t hard to decipher. Global warming has ceased to be a topic only subjected to yearly reports by national agencies. It is a phenomenon that keeps on becoming more real every day, with its consequences being felt more viciously by all the countries now. But better late than never. Elevating awareness and solution-based approach is gaining momentum amongst all stakeholders.

Mattresses are no exception. Occupying large space on landfills and taking almost 80-100 years to decompose, EOC (end of cycle) mattresses pose major environmental issues. It is almost ironic. Something that endows ‘sweet dreams’ sleep for years could become a nightmare for the planet in its last stages. However, sustainable solutions to this problem have been in experimentation for more than a decade now and are gaining serious attention by many countries. Let’s look at some of the leading examples.

The US disposes up to 20 million mattresses each year according to industry sources, adding as much as 800 million cubic feet to landfills. The bed-in-a-box marketing and super convenient return policies have definitely facilitated better quality of sleep and growth for the industry, but at the cost of swelling the already dreadful numbers stated above. However, laws by certain states, initiatives by NGOs and city councils, and innovative efforts by producers point to a better future for EOC mattresses in the country.

California, Connecticut, and Rhode Islands are soon to be joined by Oregon as states with a legislature-backed mattress recycling program. Through this EPR (Extended Producer Responsibility) approach, the law requires that the mattress producers, with the help of a certified mattress recycling organisation, create a state-wide program to collect and recycle mattresses. A visible recycling fee is levied on the consumers on the purchase of each mattress, which is further used by organisations to collect, transport, and recycle mattresses, combat illegal dumping, and educate consumers as well as the larger industry regarding the need for mattress recycling.

Trailblazing the recycling efforts in these states is the Mattress Recycle Council, a non-profit organisation incepted in 2015 by mattress industry stakeholders. In the march of 2022, they made the proud announcement of reaching the milestone of 10 million recycled mattresses, thus diverting as much as 375 million pounds of material from landfills and incineration. “In addition, our Bye Bye Mattress consumer education effort has informed residents why mattress recycling is important and how to do it correctly,” said Mike O’Donnell, MRC’s Managing Director

MRC leverages existing solid waste infrastructure to obtain mattresses from waste haulers, landfills, transfer stations and public works yards, as well as mattress retailers, businesses and institutions that dispose of mattresses, such as hotels, colleges, and nursing homes. Their Sleep Products Sustainability Program helps mattress manufacturers reduce waste while increasing operational efficiencies. Training, program resources and certification are all offered at no-cost to eligible manufacturers. Currently, they are seeking creative proposals that demonstrate how mattress components can be used in new and reformulated products, with select applicants eligible to receive as much as $100,000.

As for other states, the efforts don’t lag that far behind. Websites like Earth911.org host one of America’s most extensive recycling databases, with over 100,000 facility listings across the US and Canada. Many municipal offices are offering free pick-ups and organising community drives too. Efforts are also being stressed upon making the process more accessible. Some sources suggest that fees are as minimal as $15 in certain areas, in comparison to city landfills and mattress retailers charging as much as $20 to $50 for disposal services.

The country discards 1.8 million mattresses annually, of which surprisingly enough 60 percent are collected by a recycling facility. Soft Landing, a national social enterprise operating in Victoria, Western Australia, ACT, and NSW, is a household name by now. Besides offering collecting and recycling services at minimal costs, they also have a wide network of drop-off locations. Many government backed databases and organisations like Australian Bedding Stewardship Council (ABSC) are working relentlessly to optimise the processes.

Current recycling processes only recover roughly 44-64 percent of the materials (or less) which is predominantly steel and polyurethane foam. The diversity of materials used and construction methods create complexity at EOL for recyclers. Lack of consideration at the product development stage for recyclability at the end of the useful life of a mattress, makes circularity virtually impossible. This is an area being addressed head-on by ABSC. A 60 percent recycling rate with 40 percent efficiency is an illusionary number after all.

The percentage of recycling of mattresses in comparison with sales is about 10-20 percent on an average worldwide. Rest of the mattresses are going to land fills. The constant innovation in recycling the mattress needs more support and strong will.

Countrywide analysis by the National Bed Federation (NBF) suggests that 7.26 million mattresses are sold annually while only 1.36 million are recycled, a rate lower than 20 percent. In the UK, collection of mattresses poses as much of a dilemma as its recycling. Flytipping (illegal dumping of waste) generates a bill of nearly £60 million a year to taxpayers in England. Local councils offer a collection and disposal service for bulky waste, but at surprisingly expensive rates. There’s often no guarantee that a mattress won’t end up in a landfill.

It has rather been the efforts of other stakeholders that have turned out to be more fruitful. Number of high-street retailers such as Argos, are offering To collect and recycle your mattress for a fee of £20 when you buy a new mattress. John Lewis offers a similar service, charging new mattress customers a fee of £29.95 to responsibly dispose of their old mattress. Bed-in-a-box mattress brands such as Emma and Eve also offer an old-mattress collection service for customers.

However loose regulation and inadequate transparency is evident. In July 2019, 100 containers of British waste were found in the port of Colombo, Sri Lanka. A close inspection of the picture reveals that many of the mattresses are wrapped in distinctive green packaging. National retailers use these under their take-back scheme, meaning mattresses that were supposedly sent for recycling have been illegally dumped in third world countries.

The National Bed Federation has a code of practice and accreditation system for genuine mattress recyclers. All the companies listed on RAMR (Register of Approved Mattress Recyclers) have been carefully vetted and audited to make sure they are trading legally, complying with all relevant regulations and standards and recycling responsibly.

With almost 75 percent of mattresses being collected and recycled, the country is spearheading the recycling revolution not just in the EU but on a global scale. The company RetourMatras alone claimed to have handled 1 million mattresses in 2020 at 3 of its Dutch locations. In a press release earlier this year, Patrick de Kort, Regulatory Affairs Manager of EUROPUR said “In our country, I’m glad to say that we now have solutions for dealing with the 100+ Eiffel Towers of mattresses reaching the end-of-life stage every year in an environmentally sound manner.”

EUROPUR stands for European Association of Flexible Polyurethane Foam Blocks Manufacturers. Among many materials used, polyurethane foam happens to be a material of choice amongst manufacturers in Europe. To contribute to mattress recycling, the polyurethane supply chain is currently investing heavily into expanding existing and developing new recycling technologies.

He further remarks “This is a very exciting time for the recycling of mattresses and flexible polyurethane foam. With better collection and dismantling capabilities and new recycling technologies reaching the market stage, we can finally be confident that more and more valuable materials will be recycled. These technologies will enable the recycling of material from mattresses reaching their end-of-life stage today instead of various mattresses that are designed for recycling which will only reach this stage in 10–15 years.”

The intent and dedication of Netherlands in optimising their mattress recycling efforts is evident in their solutions acknowledging and addressing the urgency of the waste problem.

To state the obvious, large scale operations using advanced technology is the need of the hour. This will make the process more profitable too and thus give the stakeholders the much needed incentive to participate. A major dutch recycling company, RetourMatras, is spearheading this realm. Their highly automated and sturdy technology backed method is believed to bring up the efficiency to a peaking 90 percent and they are in the process of opening Europe’s biggest mattress recycling plant. Yet it can only be specialised to cater to chemical recycling of PU mattresses.

This brings us to another important point. The constant innovation and diversity of mattresses poses another challenge, keeping large long-term investments at bay. ‘Bed in a box’ mattresses are relatively homogenous and provide easier recycling opportunities. However, some recyclers believe it is the heterogeneity of older mattresses itself that provides with better EOC market opportunities and monetary incentive. For eg: Stronger end markets, like scrap metal, can help buoy weaker ones, like shoddy.